Skip to content
Home > Get involved > Can I get covenant funding? > THE NATIONAL LEAGUE SIGNS UP TO ARMED FORCES CORPORATE COVENANT

THE NATIONAL LEAGUE SIGNS UP TO ARMED FORCES CORPORATE COVENANT 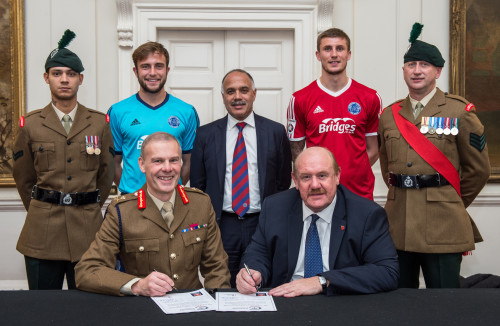 The National League, the competition which covers the fifth and sixth tiers of football in England & Wales, has joined an ever growing list of leading companies and organisations in signing up to the Armed Forces Corporate Covenant.

The National League consists of 68 clubs, arranged over three divisions Ð National, North and South. TodayÕs specific signing event took place in the iconic military setting of Horse Guards and involved the Competition itself. TodayÕs signing followed the November board meeting and Chairman Brian Barwick signed on behalf of The National League.

To further recognise the close link between The Army and the game of football two football players from Aldershot Town, the home of the British Army, were present alongside soldiers from the London Irish Regiment and HQ London District. 100 years ago members of these units were among those soldiers who took a break from hostilities on the Western Front to play the Òbeautiful gameÓ Ð the First World War Christmas football match has become an icon of how sport can transform lives, even those enduring the horrors of the worst of war.