Service of Remembrance at the Cenotaph 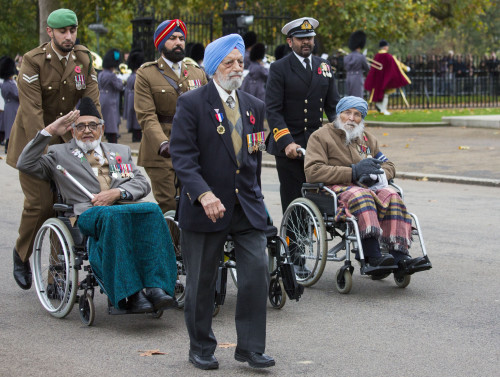 Seventy years after the Netherlands were liberated from Nazi rule by British and Allied Troops, The King of the Netherlands has joined Her Majesty The Queen to lay wreaths during the National Act of Remembrance at the Cenotaph in Whitehall.
The Netherlands had the highest per capita death rate of all Nazi-occupied countries in Western Europe during World War Two – over half (107,000) were Holocaust victims, deported and murdered Jews. To thank the liberators and commemorate the victims of war, His Majesty The King of the Netherlands has also participated in Remembrance events in Poland, Canada, France and the United States in this anniversary year. His Queen Máxima witnessed todays Service of Remembrance from the Foreign and Commonwealth Balcony with other members of the British Royal Family.
Beginning Britains most solemn event, serving detachments formed a hollow square at the heart of Whitehall. Troops were provided by the Royal Navy, Household Cavalry Mounted Regiment, 1st Battalion Grenadier Guards, 2nd Battalion Royal Gurkha Rifles, 4 Regiment Royal Logistic Corps, the Adjutant Generals Corps, 71 Engineer Regiment (Reserve Force) and the Royal Air Force. The Pipes and Drums were provided by The Black Watch, 3rd Battalion The Royal Regiment of Scotland whose predecessors fought at the Battle of Loos 100 years ago, which was also commemorated this year.