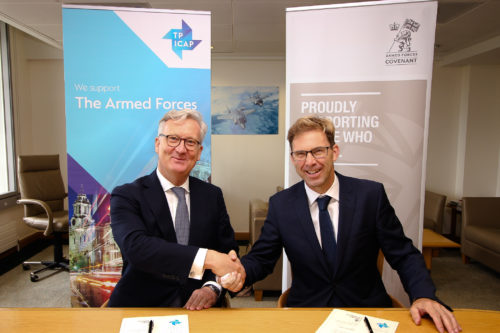 The signing was hosted at the Ministry of Defence, in the office of the Minister for Defence People and Veterans Rt Hon Tobias Ellwood MP. It was attended by TP ICAP senior management, including Chief Executive Nicolas Breteau, members of TP ICAP’s Veterans’ Network, Paralympian and former soldier Derek Derenalagi and his wife Ana Derenalagi.

Minister for Defence People and Veterans, Tobias Ellwood, said: “I’m really pleased that TP ICAP has signed the Armed Forces Covenant. In doing so, the company has recognised the benefits of employing our talented military personnel, particularly within the financial services sector.”

Nicolas Breteau said “Serving in the Armed Forces helps people develop a wide range of transferable skills, including working under pressure and making good quality decisions. We have seen first-hand how their unique experience can benefit our organisation and believe other financial services companies need to tap into this exceptional pool of talent”

To date nearly 4,000 companies have signed up to the Covenant. TP ICAP is proud to join them in upholding the key principles of the Covenant and confirm its status as an Armed Forces friendly organisation. www.tpicap.com