Skip to content
Home > Covenant in action > VE DAY70 Service of Remembrance at the Cenotaph.

VE DAY70 Service of Remembrance at the Cenotaph. 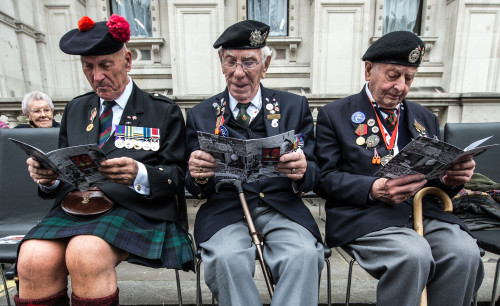 WWII Veterans read the program for the VE Day Service ahead of the ceremony.

VE DAY70 Service of Remembrance at the Cenotaph.

HRH The Duke of York attended the Service of Remembrance at the Cenotaph today, which was held at 3pm, to coincide with the moment Winston Churchill broadcast to the nation in 1945. It was marked by a nationally observed two-minute silence marked by minute guns fired from the parade ground Wellington Barracks by The KingÕs Troop Royal Horse Artillery and from the Tower of London by the Honourable Artillery Company. An excerpt from Winston ChurchillÕs VE Day speech was read by his Great-Grandson, Mr Randolph Churchill.

During the Service, senior political and military representatives laid wreaths, witnessed by more than 100 veterans and their guests representing the various organisations Ð both military and civilian Ð who served in WW2. The service was led by The Bishop to Her MajestyÕs Armed Forces, The Right Reverend Nigel Stock, supported by The Choir of St Martin-in-the-Fields.

Musical support was provided by the Band of the Welsh Guards, under the direction of Lieutenant Colonel Kevin Roberts, and assisted by The Buglers of the Royal Marines and Trumpeters of the Royal Air Force. Dr Andrew Earis, Director of Music conducted the choir.