The Armed Forces Covenant represents a promise by the nation that those who serve or have served, and their families, are treated fairly.

The Armed Forces Covenant can be signed by:

Signing the covenant means that you are supporting your employees as reservists and veterans.

What you can pledge

Download an editable template that will guide you through what you could include in your covenant promise:

The covenant should be signed by someone in authority who will make sure that these promises are implemented, this could be the CEO or HR Director. It could also be co-signed by a member of the armed forces.

You can pledge to

For more information about signing the Armed Forces Covenant, you can email afcovenant@rfca.mod.uk

By signing the Armed Forces Covenant (AFC) an organisation demonstrates its intention to support the Armed Forces community and provides the signatory with the opportunity to be recognised by the Employer Recognition Scheme (ERS) award.  An ERS award shows that the recipient is delivering tangible support for the Armed Forces community.  The Ministry of Defence (MOD), as the representative of HM Government, welcomes these commitments and is grateful for the support being pledged and provided. However, neither signing the AFC nor achieving an ERS award should be taken to imply MOD endorsement of any individual or organisation.

ERS awards at Silver and Gold level are reviewed every five years, at which point they can be renewed for a further five years, providing the organisation is continuing to deliver support. However, at any time, the MOD reserves the right to withdraw an award and/or to remove an organisation from the register of AFC signatories,  if it considers that the organisation is acting in a way that is incompatible with the spirit of the AFC or otherwise behaves in a way that could bring the AFC,  the ERS or the MOD into disrepute.

By signing the AFC and/or achieving an ERS award, an organisation becomes eligible to use the Covenant and ERS logos. However, this permission remains at all times conditional upon complying with the branding guidelines. Any organisation that is removed from the AFC register or has an ERS award withdrawn must remove the related branding from all corporate material including but not limited to its websites, social media channels, publicity leaflets etc as soon as practicable. 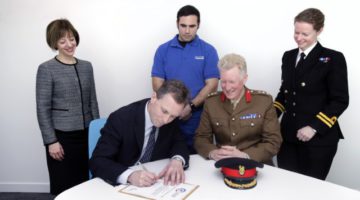 Find out how your business can support the armed forces

Who has signed the covenant?

Search businesses and local authorities that have signed the covenant

Read more on Who has signed the covenant?
Did you find this useful?