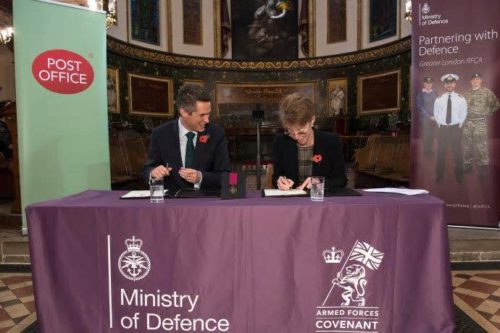 The Post Office became the 3000th signatory of the Armed Forces Covenant on  7 November 2018. The signing took place at a Service of Remembrance to mark the centenary of the end of the First World War, attended by Defence Secretary Gavin Williamson and Group CEO of the Post Office, Paula Vennells.

Those who have served our country so courageously deserve the full support of organisations and businesses across the public and private sector. Today, the Post Office has demonstrated the value that reservist and ex-service personnel can bring to businesses.”

The Post Office will work with the MOD’s Career Transition Partnership (CTP) to facilitate employment for former service personnel by advertising their vacancies on the CTP’s website. They will also offer a specialist training programme, commit to hiring a certain number of veterans, and offer paid leave for reservists and time off for any deployment commitments. Alongside this, they will support the Cadet Force by granting adult volunteers five days paid leave for their annual camp and establish a new Post Office Armed Forces Network for those with links to the military.

“It’s a real honour to sign the Armed Forces Covenant on behalf of the Post Office at this very special service, recognising the value that our serving personnel, both Regular and Reservists, veterans and military families contribute in the present to our business and our country. We know that having a diverse workforce brings huge benefits to a business; and our ex-Armed Forces colleagues and those in the Reserves are a unique and vital asset to the Post Office. We want to thank them for their service and to ensure that we continue to create a business in which everyone can thrive and develop as part of the Post Office team.”

“Our armed forces are one of the most professional forces in the world. Our people are brave, disciplined and natural leaders. Organisations such as the Post Office can thrive by taking advantage of these transferable skills. I encourage more businesses to sign up.”