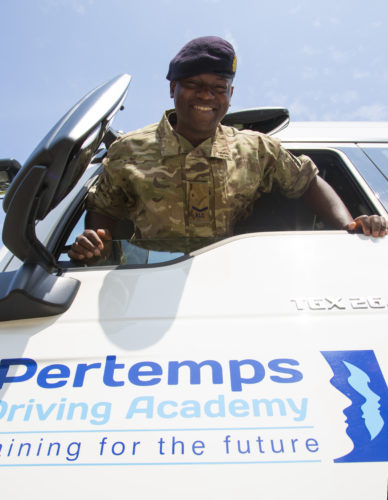 Image shows LCpl Carlos who works for Pertemps and is a reservist for 219 (Doncaster) Sqn which is part of 150 Regiment.

Army Reserves Drive Opportunity For Unemployed.The Army Reserves today announced a new pilot scheme to partner with civilian employer Pertemps to drive up skills in the commercial haulage sector. Reservists joining the Royal Logistic Corps as drivers will be able to top up their skills through this partnership to gain their civilian driving certificate, with both the Army Reserve and Pertemps guaranteeing them part time work over the year to help them move out of unemployment. Pertemps provides drivers to the haulage industry, but there is a skills shortage in the sector which means seasonal peaks at times such as Christmas can leave firms struggling to find drivers. The Armys driving training qualifies drivers for military LGV vehicles but does not provide the civilian industry certification, now with more training paid for by Pertemps the recruits can gain their commercial licence  which would normally cost them around £1000. Pertemps are a supporter of the Armed Forces Covenant and offer flexibility to their Reservist employees to undertake military training. Today they re-signed the Covenant to underline a new Portfolio Employment Model partnership to support the Army Reserve.Speaking at the Covenant signing at Wellington Barracks, London, Minister for Reserves Julian Brazier said: